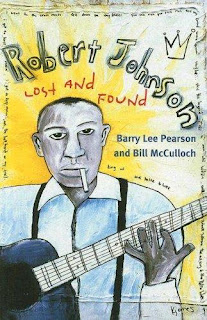 
Carefully surveying the most current set of valid Johnsonia, including an attempt to reconcile the many conflicts in the testimonies of Johnson’s acquaintances, Barry Lee Pearson and Bill McCulloch aim with Robert Johnson: Lost And Found to not only surgically discredit every last piece of the mythology that’s sprung up around Johnson like so much kudzu, but also to trace the original sources of those myths, and the paths they’ve taken on their way to becoming common misinformation.
They do a skillful enough job of this that something like a flesh-and-blood Robert Johnson begins to arise from the murk, shake off the mud and peel away the vegetation, and stand before us, finally, as a recognizable human being. The authors ought to be content to help bring him along to this point, but the righeous indigation with which they condemn all those complicit in fostering the mythological Johnson results in an often infuriating read.
Pearson and McCulloch ignore the fact that history rarely emerges as a wholly-developed entity. It tends, instead, to grow in stages, beginning with a few scant facts coupled with patches of rumor and legend, and often smoothed over with pure invention. This process is entirely normal and human, and it is only in response to such primordial accounts that the more professional work can take place.
For Johnson, this more accurate version has been slow in coming. Given this vacuum, along with the essentially mysterious quality of his music— how else to explain, for instance, how a fit man in his mid 20s can sound as often as not like he’d just stared, unblinking, into life’s terrible chasm? — and the usual process of romanticization, and it seems perfectly natural for the kudzu to have so flourished.
While I applaud Pearson and McCulloch for their clear demonstration that their subject acquired his musical skills the old-fashioned way, their lack of sympathy for the dynamics of popular mythology strikes me as unmercifully clinical. By so successfully demystifying Robert Johnson, in fact, they have left him more mysterious than ever, as shorn of such stuff we are left with no idea of the source of his dread.
Posted by Mike Stax at 3:40 PM

And the myth is probably what lead most of us to the music in the first place... I probably would have got to RJ eventually, but the x-rd/devil thing was a pretty big hook to a teen, same as the exploding bird/dog was to Blue Cheer not to mention the whole "working class/r'n'r decadence" 60's myth/hype for the Stones - my inital exposure to the Stones was 'harlem Shuffle' so 'myth' was needed!

I dunno, personally I never really got into the whole crossroads & hell hound business, but there is enough real info I think to make his life interesting both as an artist and otherwise. Clear out that dang kudzu I say!